Do you have what it takes to run a football routine correctly and in time to catch a winning touchdown pass? Test your skills in Return Man – Wideout! 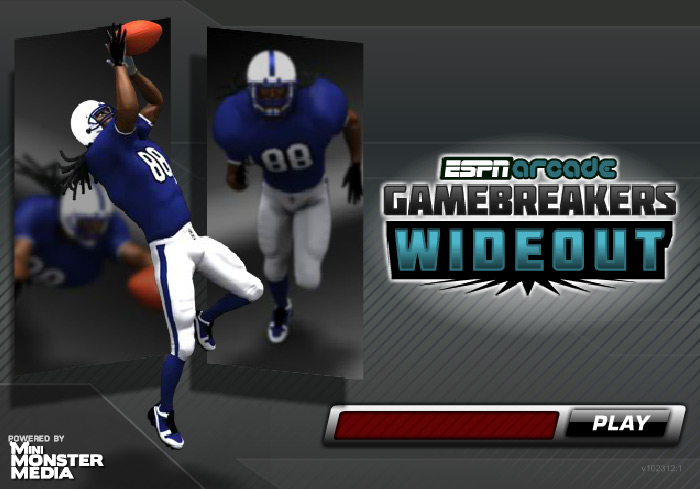 In the Wideout version, you play as a receiver, running down the field with a play stuck in your head that you’ve practiced countless times. Your job is to carry out this play correctly, and make it into the yellow circle in time to make the winning catch leading to a touchdown. Be careful, though. You don’t want to get there too early or too late! If you reach the circle too soon, the defenders will block the pass. If you get there too late, the play will result in an incomplete pass and a possession loss. Lose a total of four possessions and it’s game over for you!

The controls in Return Man Wideout are pretty straight forward. Players use the I, J, K, and L buttons on their keyboard to move the receiver in the direction they want him to run. Using the spacebar during the game at the appropriate time will allow you to catch the football, scoring the winning touchdown! In addition to these basic key functions, you can also press the M key to mute the game’s sound effects, and if you press the spacebar while on the score sheet page, it will continue the game into the next level. Alternatively, you could use your mouse to click the continue button on the screen.

Return Man Wideout features many different playing levels. Completing certain levels will unlock the three valuable special moves that your football star can perform to ensure a successful play. These three special moves are: Jump Catch, Afterburner, and Diving Catch. These special moves become invaluable when you are face with near-impossible catches in the higher levels of the game!

If you’ve ever played any of the previous versions of Return Man, you are aware of how tricky the games can be. Return Man Wideout is no different, although some believe it to be harder than others! If you are struggling to complete a level, test out some of these tips from experienced players and watch your score soar!